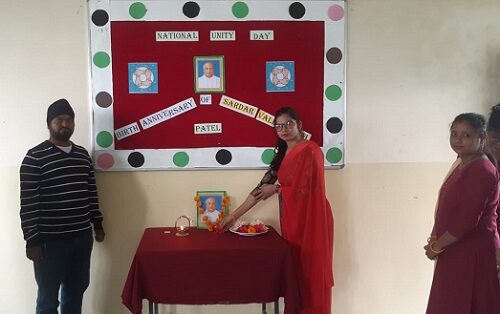 The essence of the day was highlighted by all students and teachers striving towards “Ektha.”  Mrs. Archana Devi, school coordinator spoke on Sardar Patel and national unity. His vision for the nation was articulated by the principal, Dr. Arindam Mohanta. In his speech, he spoke of Sardar Patel’s crucial role in the unification of India. The energetic children were involved in several activities, like march past, poetry competition for unity, and the singing of National Anthem. The basic idea was to encourage students to be ambassadors of unity, peace and safety.

Darshan Education Foundation has been providing students with an excellent all-round education since the inauguration of its first school, Darshan Academy Meerut, in India, in 1995.

About us
Our Vision
Our Mission
Academics
Career
Picture Gallery
Help us to improve our website!

We use cookies on our website to give you the most relevant experience by remembering your preferences and repeat visits. By clicking “Accept All”, you consent to the use of ALL the cookies. However, you may visit "Cookie Settings" to provide a controlled consent.
Cookie SettingsAccept All
Manage consent

This website uses cookies to improve your experience while you navigate through the website. Out of these, the cookies that are categorized as necessary are stored on your browser as they are essential for the working of basic functionalities of the website. We also use third-party cookies that help us analyze and understand how you use this website. These cookies will be stored in your browser only with your consent. You also have the option to opt-out of these cookies. But opting out of some of these cookies may affect your browsing experience.
Necessary Always Enabled
Necessary cookies are absolutely essential for the website to function properly. This category only includes cookies that ensures basic functionalities and security features of the website. These cookies do not store any personal information.
Non-necessary
Any cookies that may not be particularly necessary for the website to function and is used specifically to collect user personal data via analytics, ads, other embedded contents are termed as non-necessary cookies. It is mandatory to procure user consent prior to running these cookies on your website.
SAVE & ACCEPT